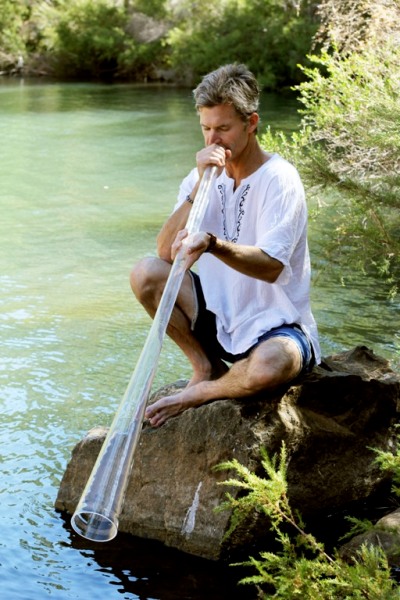 Julian has learned Yidaki, (Didjeridu) directly from Aboriginal people around Australia including Arnhemland (where the Yidaki originates), and has been playing and healing for more than 20 years.

He mainly uses the instrument in its traditional way for healing and ceremony and has also performed in a contemporary way in Australia, Europe, U.SA and Canada collaborating with many world musicians and varied music genres.

In 1997 he was invited by an Aboriginal artist to live and work with Aboriginal people in the Northern Territory 19 years ago. This opportunity greatly deepened his knowledge of Aboriginal Art, Stories, Culture,Healing,Ceremonial music and Earth wisdoms. During this time he learned from several Elders who are masters of the Yidaki and Mago and in 1997 was adopted by an Arnhemland family that has a direct lineage to the Yidaki, Mago, (Didjeridu ),which has been played for thousands of years.

This unique instrument was created in the quest for a highly resonant vibrational tool for Julian’s healing work
‘I began designing these instruments 3 and a half years ago to enhance the effectiveness of the Sound healing work I was doing.I have worked in the field of Sound healing for more than twenty years and this Crystal Yidaki instrument has taken my work to a whole new level.
The feedback I have been getting from clients has been incredibly positive including people who I am treating with cancer and other forms of illness

How the Crystal Yidaki works

The Sound and Vibration generated by the Quartz Crystal Yidaki enhances and boosts the free flow of energy through the energetic meridians of the body similar to the way acupuncture works.

When the instrument is played into the body it stimulates an increased flow of energy and blood to where the sound and vibration is directed.

The cells actually start vibrating and resonating with the tone of the instrument and this can be felt when receiving a treatment.

When the cells are stimulated in this way through vibration and sound a synergetic process occurs on a cellular level which assists in detoxifying and enhancing the optimal functioning of each cell.
When cellular resonation occurs in this way it helps to entrain the bodies natural frequencies to their optimal resonance.

Each part of our body including the chakras,(nerve ending clusters) resonate at different frequencies.
To bring these frequencies back into alignment and balance requires a method of playing into the body and energy field. This cleanses and tunes the body to its optimal resonance leaving you feeling rejuvenated and refreshed.

The application of this sound treatment can assist in relieving many forms of pain and discomfort.
It is the same principle in the way ultrasound and acupuncture works by stimulating the meridians of the body to assist in restoring the natural balance of frequencies that encourage harmony and freedom from energetic blockages.

Stress,shock and trauma can be held vibrationally within the muscles,organs and tissues of the body causing tension,pain and Dis(ease) on many levels.